What distinguishes America from other societies? Mugambi Jouet’s academic research explores this fascinating question. He is the author of Exceptional America: What Divides Americans From the World and From Each Other (University of California Press), a book on the intriguing roots of America’s intense polarization over a host of fundamental issues, from mass incarceration to the death penalty, wealth inequality, race, religion, and beyond. He was interviewed on C-SPAN’s Book TV, NPR/WNYC’s Brian Lehrer Show, NPR/KQED’s Forum, and other radio programs about his book’s release, as well as quoted in Newsweek. His scholarship has appeared or is forthcoming in peer-reviewed journals and law reviews, such as the American Journal of Comparative Law, American Journal of Legal History, Journal of Criminal Law and Criminology, Federal Sentencing Reporter, and Theoretical Criminology.

For its 125th anniversary, the University of California Press interviewed Mugambi Jouet about his book “Exceptional America” 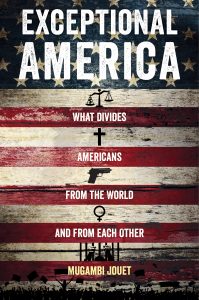 “A fresh contribution to the literature on US exceptionalism exploring the divisions within US society over a range of key issues, including welfare, economic inequality, the justice system and foreign policy. Drawing on key facts and figures, Jouet presents an engaging analysis of the fundamental contradictions shaping the USA today. . . . Jouet’s book covers a wide range of subjects, including legal studies, political sociology/science, criminology, comparative studies, history and economics. This book will spark a renewed discussion about what makes America exceptional.”

“[An] engaging and learned book . . . Seeking to understand rather than condemn, Jouet offers a rich and revealing portrait of the America that produced President Donald J. Trump.”

“Jouet brilliantly dissects the historical, political, and ideological reasons why Americans are so polarized from other nations and from each other.”

“This thought-provoking work explores a political shift that has transformed the concept of American exceptionalism into one of American superiority.”

Susan Jacoby, bestselling author of The Age of American Unreason

Nature – Palgrave Communications published Mugambi Jouet’s academic article “Guns, Identity, and Nationhood” on the right to bear arms. Meanwhile the Journal of Criminal Law and Criminology released his comprehensive study on the peculiar historical evolution of mass incarceration and prospects for reform.